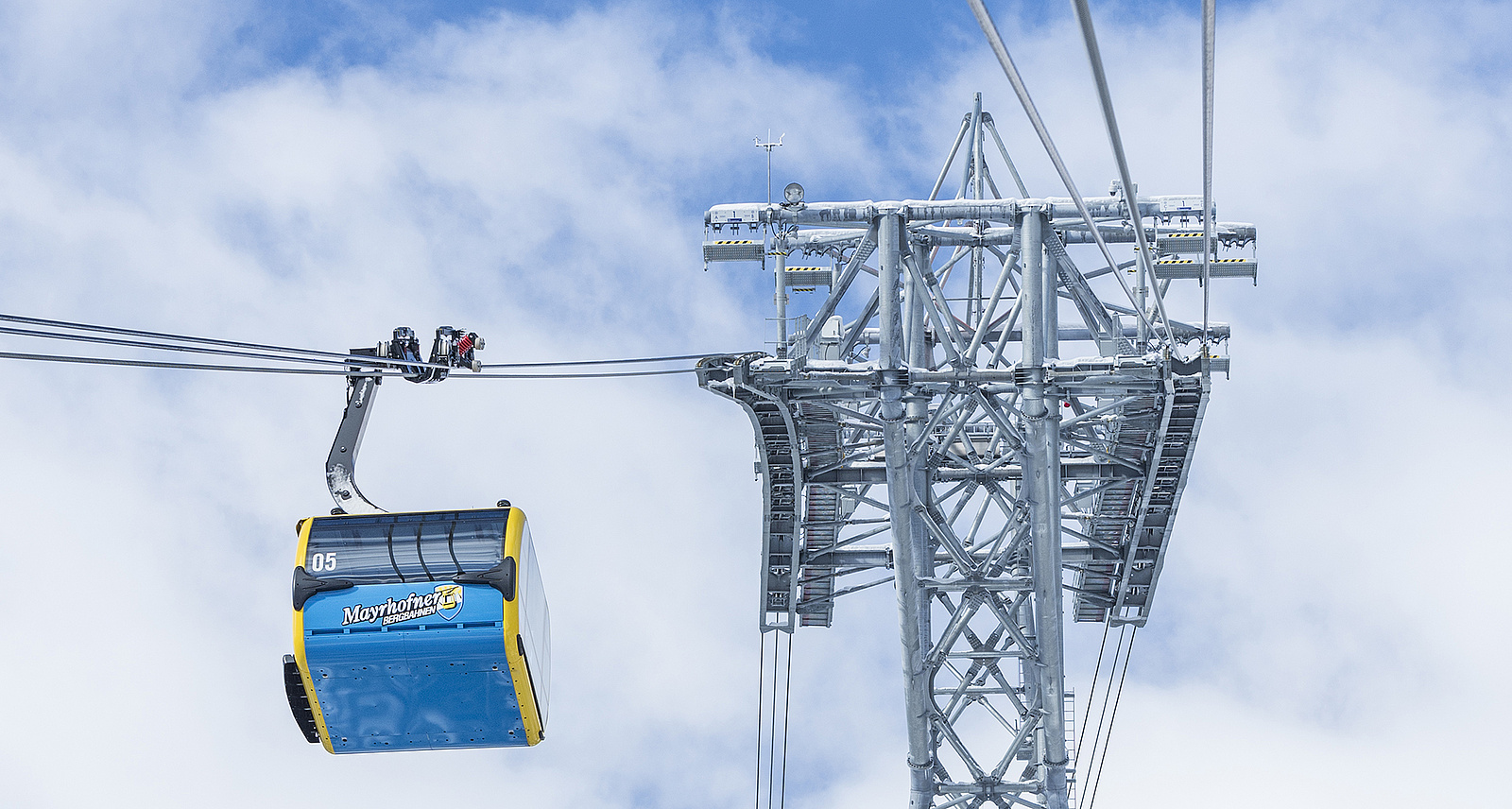 The new Penkenbahn with its innovative 3S technology is part of Mayrhofen’s mobility strategy.

In December 2015, Mayrhofen in the Tyrol celebrated the opening of the new Penkenbahn, a 3S-Bahn or tricable aerial tram built by Doppelmayr. It forms part of the modern holistic traffic management concept developed by the Mayrhofen authorities as the point of departure for a new era of mobility – both on the mountain and down in the valley. The new installation was built as a replacement for a bicable gondola lift and is designed for all-year operation. The use of an angle tower on a tricable system is a world first.

There were several reasons for choosing Doppelmayr. A major factor was the company’s know-how and experience with tricable ropeways. In addition to the innovative angle tower, the Penkenbahn also incorporates Doppelmayr’s proven recovery system, which ensures that all the cabins can be returned to the station in an emergency without the need for a dedicated evacuation ropeway. The Easy Boarding system originally proposed and first implemented by the operating company of Serfauser Bergbahnen has been further developed in collaboration with Skidata and Mayrhofner Bergbahnen and now features intelligent gates for relaxed loading. The system was designed with a strong focus on safety, particularly for children. Ski schools, for example, have their own access point and loading area – a convincing argument where children are involved.

Mayrhofner Bergbahnen and Doppelmayr enjoy a successful business relationship in a spirit of trust that has developed over the dec­ades. Together, they have handled such impressive projects as the Ahornbahn, which operates with Austria’s biggest aerial tramway car, and the Penken Kombibahn, with a record capacity for a chondola of 3,900 pph.

The new Penkenbahn is also inter­esting for the solutions adopted

in the stations. To ensure that the ground floor of the top station, with its excellent access, offers maximum space for visitor ser­vices, a vertical conveyor was incorporated to carry the spacious cabins up to the carrier parking facility on the first floor. Transit time on the highly wind-resistant 3S-Bahn is a mere eight minutes, and the ride in the cabins in the Mayrhofen corporate design is an ex­tremely comfortable experience, with padded seats and public WiFi.

Last year, Bergbahnen Mayrhofen was confronted with the challenge of replacing an old bicable gondola lift with a new installation on the same line. The line of the old Penkenbahn had an unusual feature in the form of an angle tower, which meant that Doppelmayr’s engineers had to develop a special solution for the tricable replacement installa­tion. They responded with an impressive angle tower design with customized rope guiding elements. As basic research for the new tower curve, the ropeway experts perform­ed in-depth calculations and studies. For such development work, Doppelmayr employs cutting-edge engineering software. “In order to be able to simulate travel over the curve saddles on the Penken 3S and the special haul rope guidance configuration, we first had to further develop the computer simulation program with the addition of individual software modules,” says Peter Luger, Doppelmayr’s 3S system manager. The experts in Wolfurt built their own curve test rig where they could perform the extensive material and function tests that were essential for a design that has to cope with an angle of deflection of 6.5° and develop the solution to technical maturity. This intensive test phase lasted a total of three months. That was time well spent, as no further modifications were required under operating conditions.

The Penkenbahn 3S carriage was completely reengineered for optimum performance in the complex situation of travel along the curve. “We adapted the 3S carriage for Mayrhofen to the new rope guidance configuration so that it is fully e­­quipped to handle the curve,” says Peter Luger. Doppelmayr also had to take measures to protect the rope sheaves against excessive wear as the new rope guidance configurat­ion and the angle of deflection entail a significant increase in the forces exerted on the material in comparison with the old bicable installat­ion. The mechanical design also  posed new challenges for Doppel­mayr’s engineers. A new rope sheave was developed. The monitoring system for rope position in the curve on the tower is also a new solution devel­oped by Doppelmayr’s electrical engineering department. Central visualization is provided in the stations.

New benchmark for the quality of the ride

In order to achieve the smoothest possible ride on the 3S Penkenbahn, Doppelmayr designed long rope saddles (approx. 50 meters in length). As a consequence, passengers only realize that the cabin is negotiating a curve when their line of sight changes. “The 3S angle tow­er in Mayrhofen underlines once again our potential for innovation with tricable systems. In terms of the quality of the ride, attractive­ness and safety, we actually managed to exceed our customer’s expectations,” adds a satisfied Peter Luger.

Advantages of the 3S Penkenbahn

The new chairlift in Snowmass, Colorado (USA) opened for the 2020/21 winter season as a replacement for a lift built in 1987. Featuring a Leitner…

The Sugar Bowl Express in Queenstown is a fine example of what you can achieve with a great team, commitment, know-how and state-of-the-art ropeway…

In terms of ecological slope grooming, Kässbohrer continues to push back the borders of technology. From the diesel-electric Pistenbully 600 E+ to the…

LEITNER was quick to see the importance of the direct drive for the future of ropeway engineering. LEITNER’s gearless DirectDrive, which operates with…