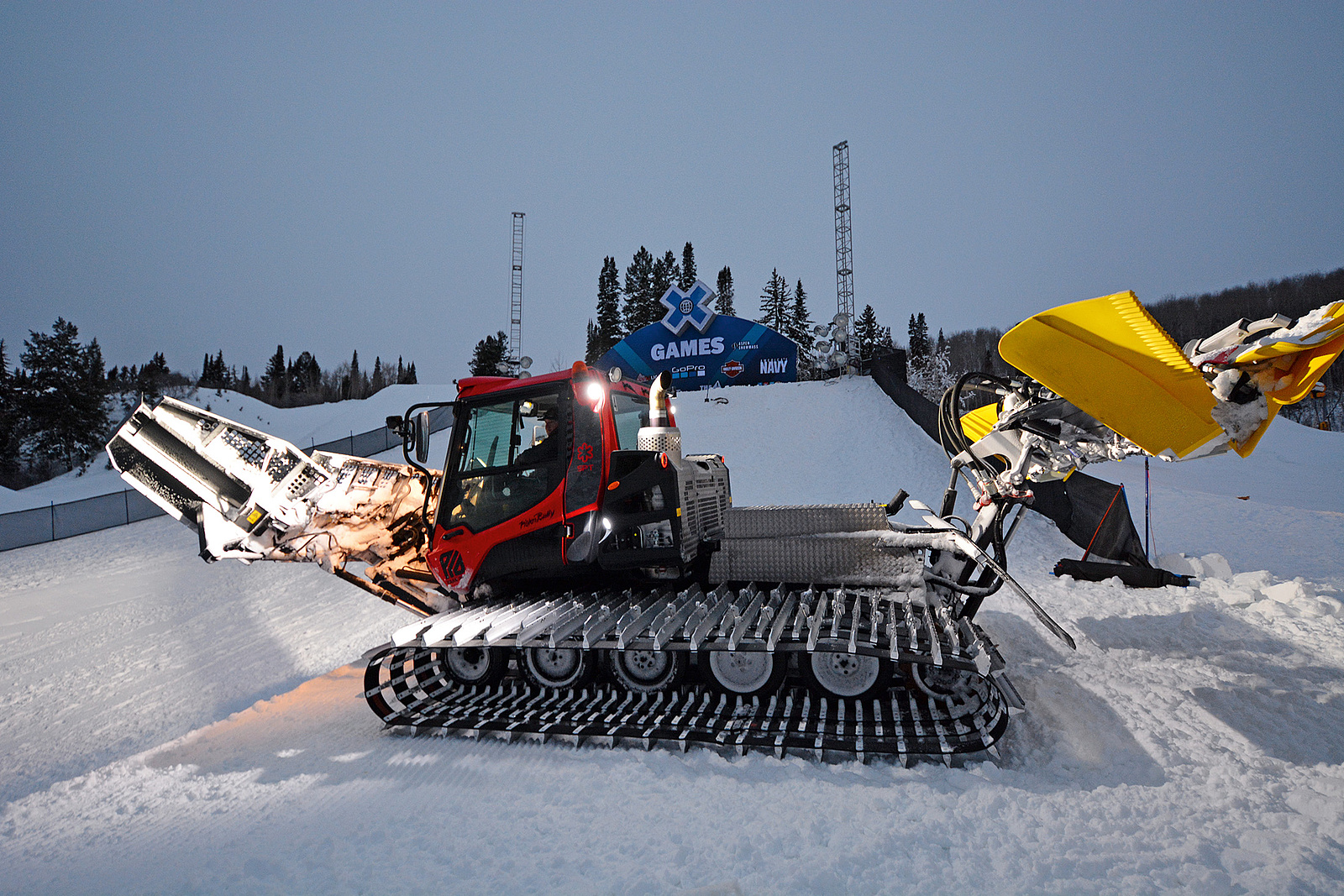 PistenBully teams up with SPT for X-Games

The X Games, owned and orchestrated by sports broadcaster ESPN, is an invitation-only event meant to showcase the world’s best ski, snowboard, snow bike (for the first time) and snowmobile athletes in snow action sports. Skiers and snowboarders compete in Big Air, Slopestyle and Superpipe events. Snowmobilers and snow bikers contend in Best Trick, Freestyle, SnoCross, SnoCross Adaptive and Snow Bike Racing. The 2017 X Games, hosted by Buttermilk Resort in Aspen, Colorado, took place January 26 – 29. X Games Aspen 2017 was televised globally in 215 countries and territories to more than 365 million homes!
Ahead of schedule with PistenBully
Snowpark Technologies (SPT), the designer and builder of the X Games teamed up with PistenBully for the event. The build fleet included five ParkPros, a 600, a 600 Polar, a 400 and a 400 Winch. The majority of hours that go into the X Games build happen long before Snow Park Technologies ever reach the snowy slopes of Aspen, Colorado. Design work, preparation, jib construction and logistics work start about a year before the event. This year, PistenBully was on the hill pushing snow on December 15 – almost a month and a half before the event commenced.
The functionality of the ParkPro with Switch-Blade2 quickly became apparent. Such features as “auto straight blade” and backblading teeth in combination with the increased action radius of the blade motion were the keys to shaping the snow features. The blade is reinforced at the top and incorporates eyelets for attaching strap hooks. This allowed SPT to quickly and efficiently move jibs, snowmaking guns, boxes and equipment. The PistenBully Snowbucket was a game changer for the SPT build team. The Snowbucket connects directly to the front quick-mount system. At 165 inches (4,200 mm) wide it can hold 2.6 cubic yards of snow (2.0 cubic meters). The attachment enabled the SPT builders to move a great deal of snow and drop it at precise locations on the hill. With an esti­mated 12 million cubic feet of snow used for X Games, the SPT builders took full advantage of the Snowbucket’s capabilities.
The Snow Park Technologies team were very pleased with the functionality of the PistenBully equipment and the service provided by the PistenBully team. SPT co-founder Mike Binnell reported about a week before the event that in his twenty years building X Games, “this is the best that we have ever had it and we are way ahead on the build.” He continued, “These cats are a total working tool that makes our jobs much easier.” SPT finished the build ahead of schedule, which gave the team peace of mind going into the training and event days.
It is truly impressive to see what X Games has grown to and the influence that it has had on winter action sports over the years. The amount of work that goes into planning and construction of the courses and features for this type of event adds an entirely different perspective to X Games. PistenBully is proud to have been a part of the Aspen 2017 X Games and to have facilitated the SPT team in a seamless and efficient build. Kudos to the whole SPT staff on yet another successful X Games!