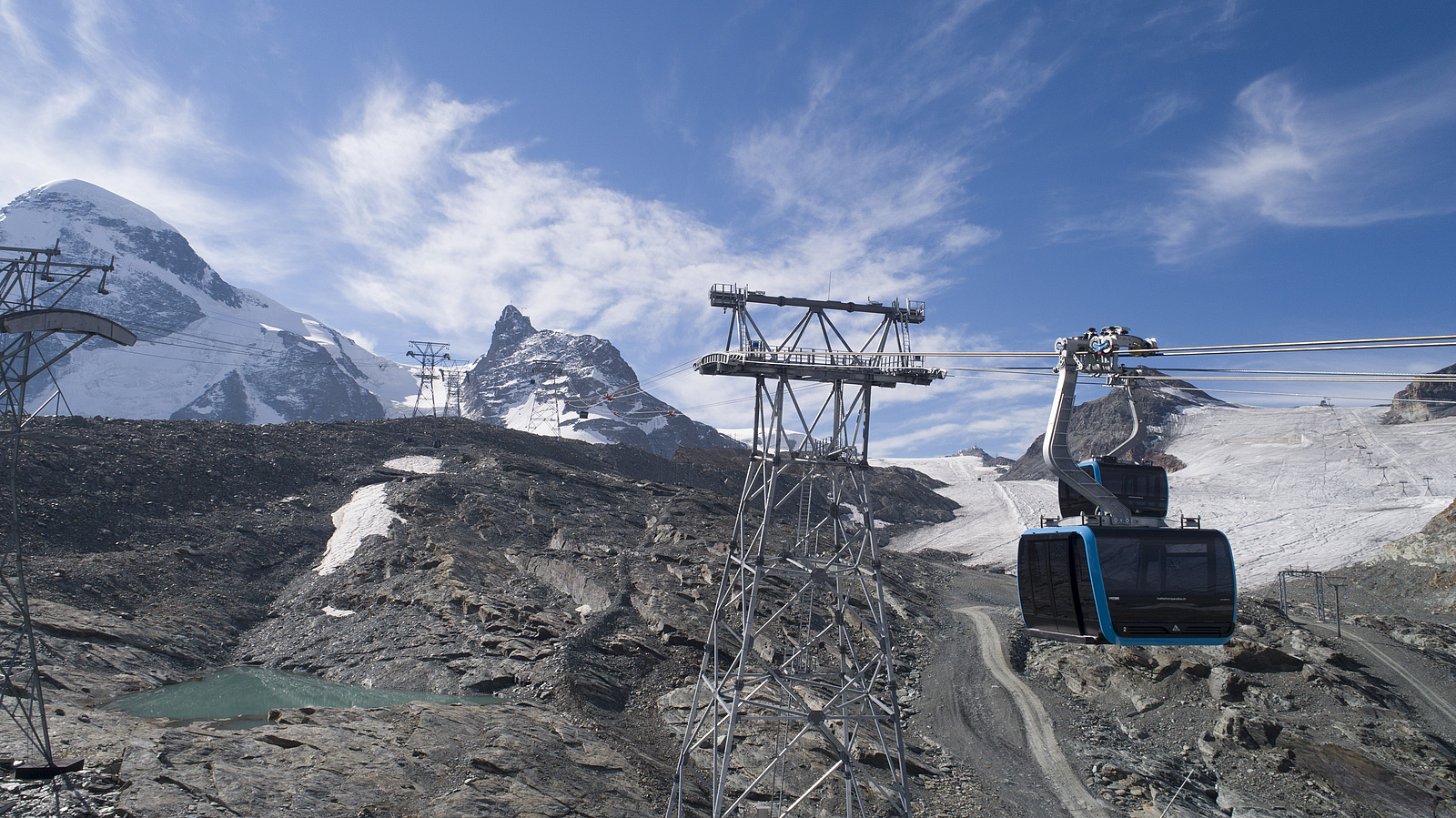 29 September 2018 marks a historic day for modern ropeway systems. With the opening of the world's highest 3S gondola lift on the Klein Matterhorn, several record-breaking aspects have been rolled into a single project. The four-kilometer journey to almost 4,000 meters above sea level leads to Europe's highest top station. With an investment of CHF 55 million, the project represents a milestone in the almost 40-year history of the Swiss ski resort.

After two and a half years of construction, the technically challenging tricable gondola lift to the Klein Matterhorn was opened on 29 September. Those responsible for the project will remember it as a particularly challenging time, in which man and material were put to an extraordinary test. The eight-kilometer long hauling rope alone weighs an impressive 67 tons and is freely suspended over a distance of three kilometers on the longest span of the system. The working conditions in the high Alpine environment with temperatures as cold as minus 30 degrees Celsius and peak winds up to 240 km/h also required top logistical and physical performance from the 145 people working on the project. The best example of this was the construction of the top station at almost 4,000 meters above sea level. “A total of 27,000 hours of work by our engineers went into the 3S system. In addition, the highly specialized team mastered a multitude of challenges, from transport logistics to the prefabrication of the stations in Vipiteno and the work on the mountain, which was performed in the most difficult weather conditions,” says Martin Leitner, Member of the Board of Directors of the Leitner group of companies.

Cabins in Pininfarina design with thousands of Swarovski® crystal beads

The Matterhorn Glacier Ride is a tricable gondola lift that is ideally equipped for all weather conditions. 3S technology offers optimum stability in strong winds and, with the extra long spans compared with other ropeway systems, is ideally suited for a project in such terrain. The high standards of this exceptional project are also reflected at the level of design. The all-year installation operates with twenty-five 28 seater 25 cabins, which in the Premium version has extra-wide doors, all-round glazing and large panoramic windows, with leather and Alcantara used for the materials. During the ride, visitors can enjoy completely new all-round views of the glacier landscape. The Symphony cabins created by the Italian master designer Pininfarina represent an additional world first. For the first time in the history of Leitner Ropeways, thousands of Swarovski® crystal beads bring a sparkle to the exterior of four of the 25 cabins and also decorate the lettering on the comfortable seats. Thanks to a special technical feature, these cabins offer a spectacular view during the nine-minute ride: After three minutes, at an altitude of 170 meters above ground, the opaque glass floor becomes transparent in seconds to provide guests with a magnificent view of the glacier below. This is made possible by the use of active laminated glass that changes from milky white to transparent under the influence of electric current.

The design of the stations also blends harmoniously into the style of the new ropeway. The top station resembles a rock and thus imitates its surroundings. The façade of the bottom and top stations – from the lower edge of the garaging level to the upper edge of the roof – consists of large photovoltaic panels alternating with panes of glass. A total of 765 PV modules have been installed in the two stations.

“This project demonstrates that the impossible can be made possible!”

After almost four decades, a new era in Zermatt has begun with the new 3S gondola lift. “Enormous progress has been made since the first summiters took the aerial tramway up to the Klein Matterhorn in 1979. But one thing still remains: the magical attraction that the Klein Matterhorn exerts on people. Thanks to the Matterhorn Glacier Ride, a technical masterpiece by Leitner Ropeways, this magical mountain is easily and quickly accessible for our guests. In addition, the foundation was laid for the planned Alpine Crossing, which will connect the areas of Zermatt (CH) and Cervinia (IT) all year round for hikers,” says Markus Hasler, CEO Zermatt Bergbahnen AG. The 3S gondola lift is the first step in realizing a unique Alpine crossing between northern Italy and Zermatt and in the long run an interconnect involving the Zermatt, Cervinia/Valtournenche and Monte Rosa ski resorts.

For Martin Leitner, too, the Matterhorn Glacier Ride is a very special ropeway system in every respect. “The system is a prestigious project with a worldwide reputation that fills me with great pride. It not only enhances the status of our company, but also proves that the seemingly impossible can be made possible!”