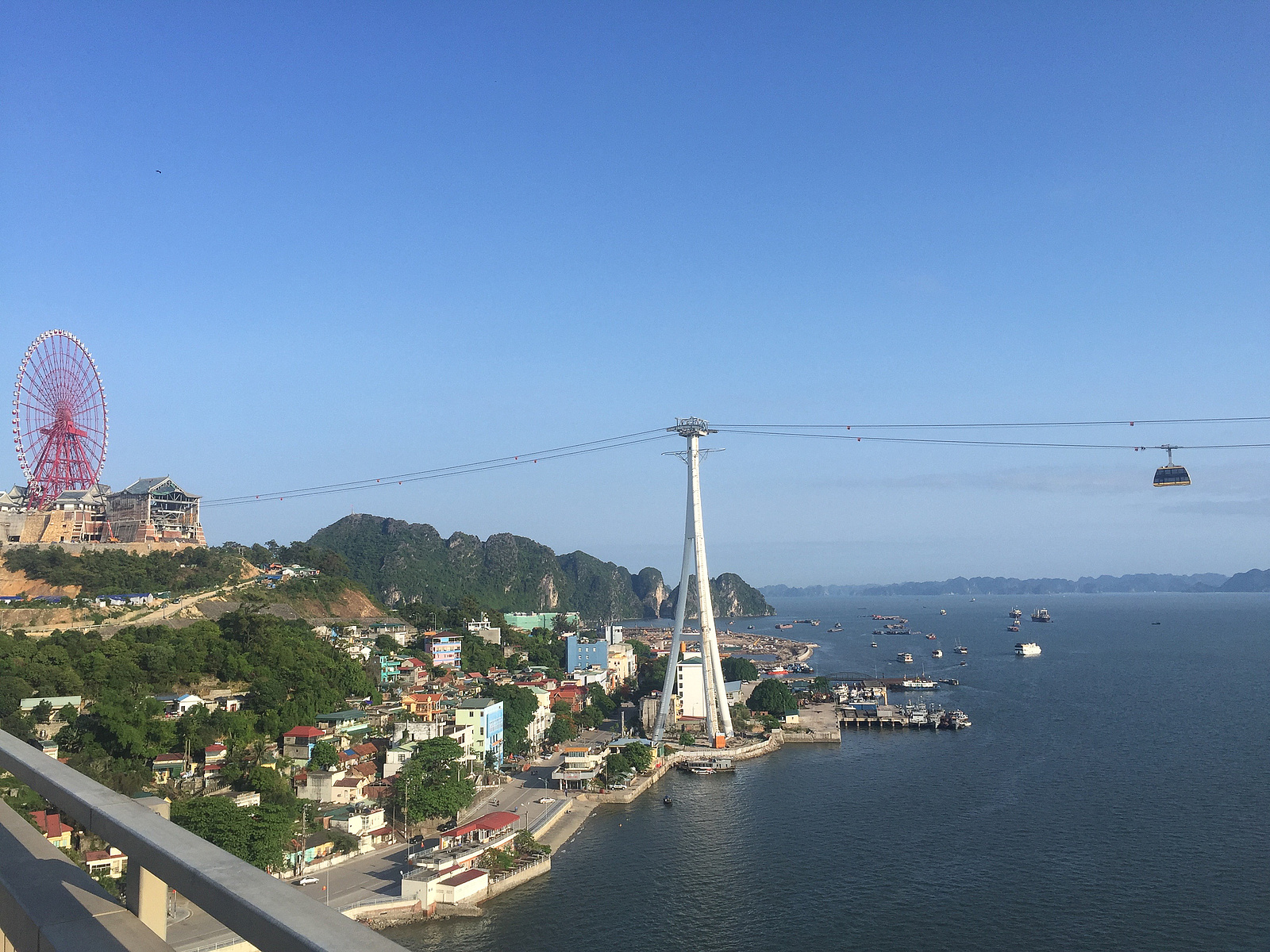 The Doppelmayr/Garaventa Group has built a reversible aerial tramway across Ha Long Bay in Northern Vietnam which puts all previous ropeway dimensions in the shade. Each of the two cabins provides space for 230 passengers and the tramway also boasts the world’s tallest ropeway tower with a height of 188.88 meters. In fact, pretty much everything on this installation can be described as XXL.

Vietnam’s current climate of investment in tourism infrastructure can be compared to the upbeat mood seen in the Alps in the mid-20th century. Ha Long Bay in the north of the country also ranks as one of Vietnam’s most popular tourist attractions. With the opening of the new tramway on June 25, 2016, the seven million visitors who head for this area every year will now be able ride across the “bay of the descending dragon” in comfort. From the lower terminal located in the Bai Chay district of Ha Long City, the new aerial tramway runs to the top of Ba Deo Hill. Swiss know-how has enabled the construction of the world’s biggest reversible aerial tramway, which puts all previous ropeway dimensions in the shade. The same investor has built an amusement park on Ba Deo Hill, where the main attraction is an observation wheel that gives tourists an extensive view across Ha Long Bay. The customer is the Sun Group, which has invested heavily in a wide range of tourism projects in recent years and made sure that these were implemented to meet international standards. The Doppelmayr/Garaventa Group has already completed a number of ropeway projects on behalf of the Sun Group in the past few years. The Sun Group also owns various hotels and resorts as well as several amusement parks.

The fact that investors in Vietnam think in different dimensions was a new experience for Garaventa. Example number one: the tramway towers. A concrete tower has been erected on either side of the bay. The smaller of the two is 123.45 meters tall. The second tower rises to a height of 188.88 meters. Never before has a tower of this size been built for a reversible aerial tramway anywhere in the world. The height is also symbolic because eight is considered to be a lucky number in Vietnam. The rope span between the two towers is 1,206 meters, while the tramway has an overall length of 2,165 meters. Example number two: the cabins. Each of the double-decker cabins from CWA is built to carry 230 passengers. Example number three: the construction period. This aspect of the project must surely mark another record achievement. The time from the initial contact between the customer and Garaventa through to the opening in June 2016 was just 19 months – including the entire approval process. The installation satisfies all applicable European codes and standards (CEN standards) for the construction of ropeways.

Garaventa supplied all the electromechanical tramway equipment for this mammoth project. Everything else, with the exception of the Doppelmayr control system and the locally built concrete structures, was manufactured in Switzerland. The drive, carriages, hangers, rope deflection equipment, counterweights, tower heads, cabins and the ropes made by Fatzer as well as the pulling machines required for installing the ropes amounted to a total weight of over 1,000 tons of equipment which was shipped to Vietnam. Installing the ropes was a particular challenge. As Ha Long Bay plays a major role in cargo shipping with large vessels, the entire rope installation operation had to be performed at a height of 50 meters above sea level. The equipment used included a rope pulling machine with a tractive force of 65 tons and a rope braking machine with a braking force of over 60 tons. The entire rope installation was performed by Garaventa specialists. A chief fitter from Switzerland was on site for the rest of the installation work and, together with a team of up to 15 ropeway specialists from the region, ensured that the biggest reversible aerial tramway in the world could be handed over to the operating company on the agreed date.